The Redevelopment History of Canary Wharf 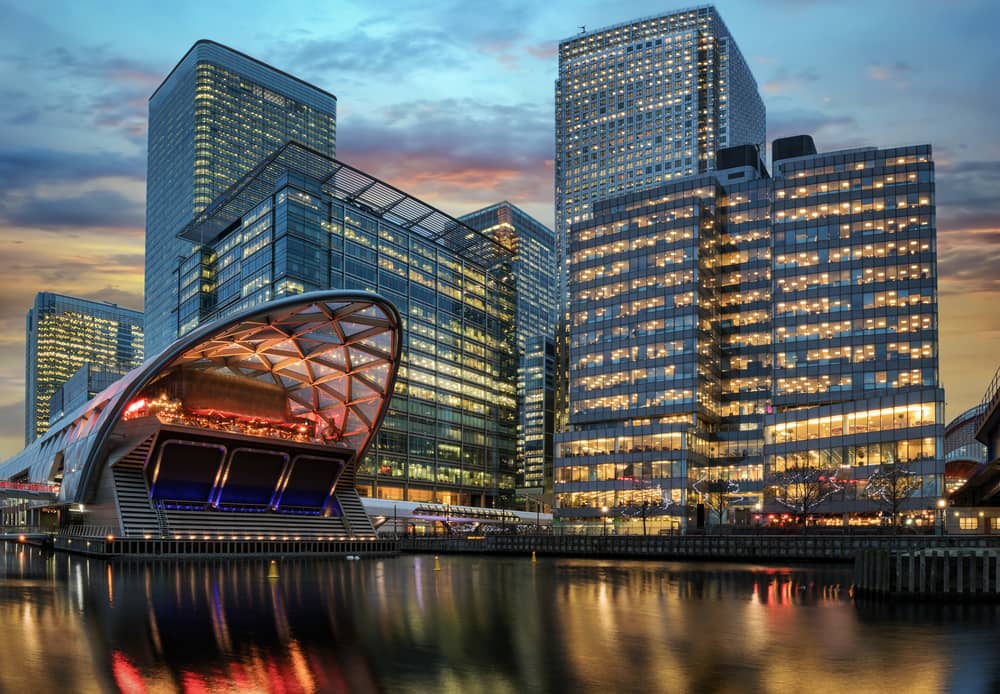 From 1802, the area we now know as Canary Wharf was one of the most important ports in the UK, importing and exporting goods across the world. The area was originally designed by William Jessop, and his original West India Docks were so successful that Millwall Docks was later added to the port area.

Canary Wharf took its name from the trade of fruit and vegetables from the Canary Islands.

By the 20th century, ships were steadily increasing in size, and the Canary Wharf docks were struggling to cope. The deeper ports further along the Thames started taking the lion’s share of the trade, and this marked a decline for Canary Wharf. By the 1960s, the entire port industry in London had faltered almost to a halt, and in the early 1980s, the docks were finally closed.

Plans for Canary Wharf’s redevelopment were originally put in place shortly after the docks were shut. The Docklands Development Corporation (established by Michael Heseltine in 1981) was formed to improve the area, but lack of funding put the project on hold.

It wasn’t until 1987, when Heseltine entered negotiations with Canadian property mogul Paul Reichmann, that the necessary funds were found. Reichmann agreed to take on the regeneration work, in exchange for substantial tax breaks from the government.

In an interview with the National Post, Reichmann explained that he’d had meetings with business leaders across London, asking them about their current premises and whether or not they were happy with them. He discovered that most weren’t content with the buildings they currently operated from, which gave him the motivation to create an area which would provide a more appealing alternative.

The tallest skyscraper in the UK?

In 1990, Reichmann’s company, Olympia & York, constructed what was then the UK’s tallest building, One Canada Square. This set the tone for Canary Wharf, and established it as a major business hub.

The towering, pyramid-topped structure remained the country’s tallest building until The Shard was built in 2010.

Historically, Canary Wharf’s past has been a ‘rise and fall’ story, and its regeneration would prove to be no exception. In 1991, it rapidly gained popularity among some of the UK’s biggest companies, with banks such as HSBC, Citigroup, Morgan Stanley and the Financial Services Authority taking up residence in the area. Several major newspapers also moved in, along with other notable businesses.

Unfortunately, just a year later, Olympia & York faced serious financial problems. They filed for bankruptcy, and as a result, Canary Wharf was placed into administration. Despite this major set-back, Reichmann managed to gather together a group of investors, and was able to purchase Canary Wharf back again, at a cost of £800million.

By this stage, the area was already well established as an important business location. However, Reichmann’s involvement with the project came to an end in 2004, and the Canary Wharf Group was taken over by Songbird Estates. Five years after this, the Qatari Investment Authority became shareholders in the company, and saved it from collapse.

Steady expansion and a change of personality

Since 2014, Canary Wharf has been steadily expanding, and further buildings are being constructed there all the time. At first, this was to meet the increasing demand for London office space. However, rising numbers of employees wanted to live near their place of work, and as such, the first residential blocks were built.

These days, Canary Wharf remains London’s secondary central business district, but has taken on a new personality, as an upcoming residential hotspot. Many retailers and restaurants have established themselves here, along with music venues, gyms, cinemas and more. The arrival of Crossrail only added to its appeal, bringing more homebuyers and renters to the area.

The impact of Canary Wharf on London

Canary Wharf has had significant impact on the capital. It’s more than just a redevelopment success story – the regeneration project created an appealing new option for businesses in numerous different sectors, and paved the path for further redevelopment work in the surrounding area.

Residential properties continue to be built too. For example, at the time of writing, the first batch of luxury apartments at Park Drive came on the market, with prices ranging from £825,000 to close to £4million.

Brian De’ath, residential sales director for the Canary Wharf Group, commented: “The regeneration of the East End is helping to bring a new wave of purchasers to this side of London, with Canary Wharf a prime destination.”

Experts predict that the area will increasingly become more residential, to accommodate the growing demand of Canary Wharf’s workers.

Canary Wharf – the facts and figures

Here are some further facts about the area: