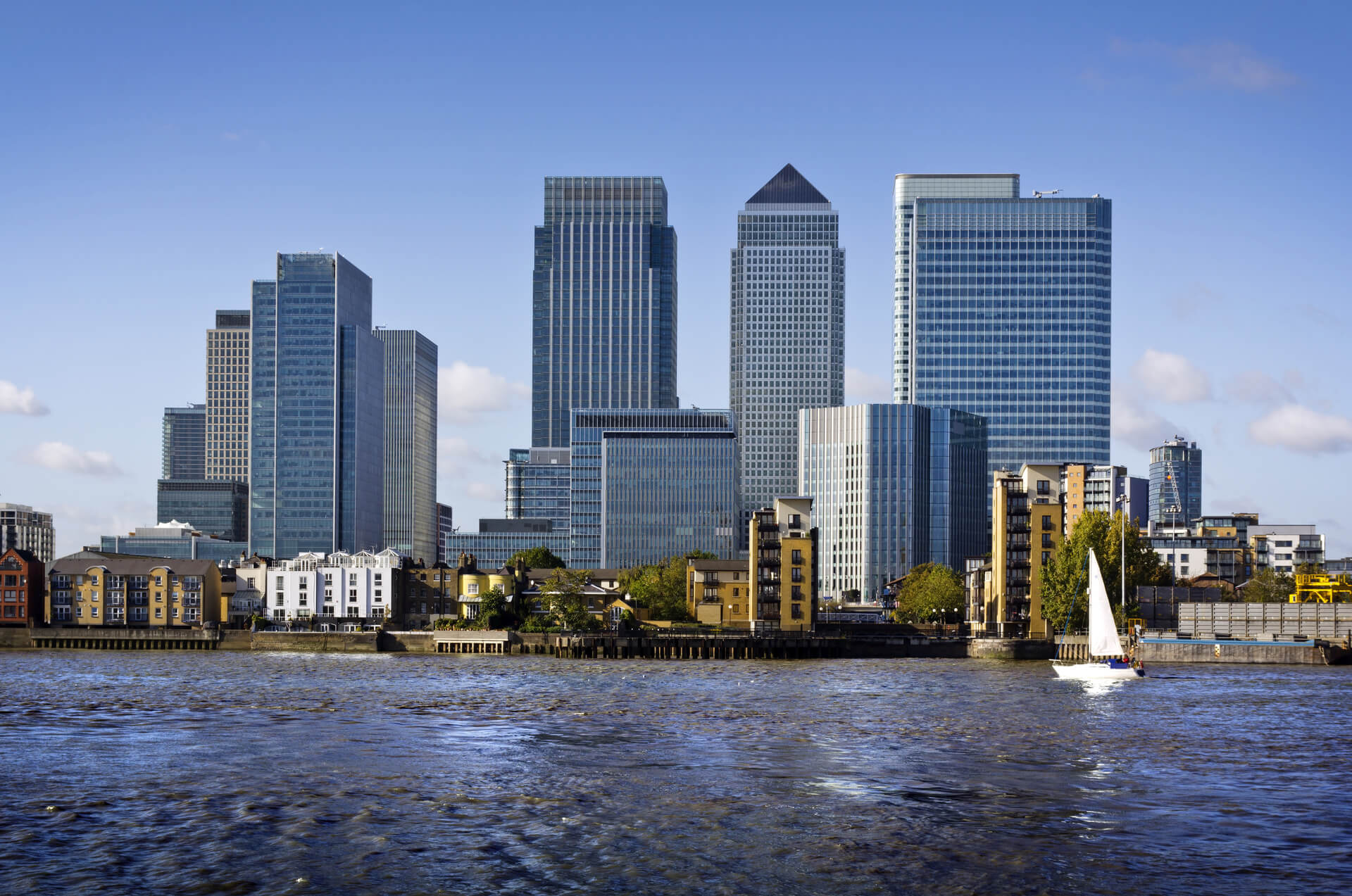 One of the big draws to this part of London and the Isle of Dogs, in particular, is the great selection of properties on offer. The area was of great import during the late 19th and early 20th centuries, meaning there are many period properties on offer. In particular, the southern part of the neighbourhood is known for its traditional dockworkers’ cottages and former industrial warehouses. Many of the industrial units have been turned into luxury apartments, offering superb views out towards the Thames.

Lovers of modern architecture are also well catered for in the Isle of Dogs.  Much of the district — particularly around Canary Wharf — was developed in the late 20th century. Around these parts, you’ll find luxury glass tower apartment blocks offering superb views and all the conveniences of 21st-century living.

Prices vary throughout the area with something to suit all budgets. However, prices in the neighbourhood tend to be cheaper than Canary Wharf. The most desirable and expensive properties are the modern glass towers and luxury warehouse conversions. While more affordable homes can be found within 80’s, 90’s, and early 2000’s apartment blocks.

One of the attractive features of the Isle of Dogs is the number of houses to the east of Millwall Outer Dock. There you can find pre-war and mid-20th century terraced houses. Many of these properties were built to house dockworkers. Now, they offer comfortable and affordable two to four-bedroom houses for families. In addition, the large green spaces in the vicinity, like Millwall Park with its city farm and St. John’s Park, are an added attraction for homebuyers and renters alike.

Most new homes to buy and rent in the Isle of Dogs are in multi-storey or high-rise apartment blocks. However, many of the older flats are in low-rise buildings that are six storeys or less. For example, in streets near Manchester Road on the south-east of the peninsula are affordable properties with one or two-bedroom flats built in the mid-1990s. This is also the area where many of the best schools in the Isle of Dogs are located.

The regeneration of the Isle of Dogs and new residential developments means plenty of flats in modern, glass-fronted apartment blocks are available. Some of the best places to look for a modern apartment with the latest facilities and conveniences are Pan Peninsula beside Millwall Dock and Landmark Tower and Anchorage Point on the west side of the Isle of Dogs next to Canary Wharf.

Warehouse conversions in the Isle of Dogs offer some of the island’s most spacious and luxurious flats. Many of the once-industrial buildings feature exposed bricks and beams, vaulted ceilings and generous living spaces. With fantastic views over the Thames or docks, it is no wonder that these converted warehouses are highly sought-after properties.

New-build home in the Isle of Dogs

Most of the new-build apartment blocks in the Isle of Dogs are off Marsh Wall near South Quay. Several tower blocks over 50 storeys high contain a range of properties — from luxury studio flats to spacious to two and three-bedroom flats. Many of these apartment blocks are self-contained with recreation and leisure facilities, as well as indoor gardens and open rooftop communal areas.

Buying a flat or house on the Isle of Dogs isn’t only about luxury accommodation for city workers. Many new affordable homes are available in Millharbour with balconies overlooking Millwall Inner Dock. Shared-ownership flats allow first-time buyers to get on the property ladder with offers of buying between 30 and 40 per cent share of ownership.

Isle of Dogs properties to rent

Traditionally, young professionals or couples made up the bulk of the rental property market in the Isle of Dogs. And with the financial district of Canary Wharf close by and a plethora of affordable one-bedroom flats for lease, many city workers continue to make up the rental market.

However, there is also a growing demand for family-size rental accommodation for people working in Canary Wharf offices. Many of the low-rise estates with two and three-bedroom flats or the terraced homes with small gardens are popular choices for families wanting to rent in the area.

Property rental prices in the Isle of Dogs vary depending on the area, size of accommodation and facilities. You can expect to pay around £400 per week for a one-bedroom flat. However, in some estates with social housing, it’s possible to find rentals for less than £300 per week. Rental prices in modern, shiny high-rise apartment blocks are considerably higher.

Best streets in the Isle of Dogs

In 2019, the Isle of Dogs was voted the best place to live in London. On average, house prices are £100,000 lower than the rest of the Capital. So which are the best streets to buy or rent a house in this Tower Hamlets neighbourhood? Naturally, the best places are the ones with the best new developments. The outstanding developments to look out for are Pan Peninsula on Marsh Wall, Baltimore Wharf near Millwall Inner Basin and Westferry Circus.

Staying power in the Isle of Dogs

It is no longer the case that people move away from the Isle of Dogs when they start a family. There are excellent schools in the area, as well as quiet neighbourhoods and open green spaces. For example, the popular Canary Wharf College has a primary school and middle school.

Additionally, the proximity to central London and Canary Wharf financial district means that workers are unwilling to swap their short journey to work for a lengthy commute from the suburbs.

When the Isle of Dogs was regenerated in the 1990s, transport was a key focus for developers. For many years the area was marooned from the rest of London, disconnected by poor road and rail networks. Fortunately, these days are long gone, with the area benefiting from several railway stations in addition to easy access to the A1261. Stations in the area include Island Gardens, Mudchute, Crossharbour and Heron Quays, all of which connect the Isle of Dogs Docklands Light Railway network. In the north of the district, Canary Wharf station also provides access to the Jubilee line, taking you to Stratford in the East and Central and North West London in the westerly direction.

For those who prefer to travel by bus, you are well catered for in the Isle of Dogs. The area is on several bus routes with numerous stops throughout the district. In addition, the area’s waterside location means boat transport is also an option. Locals can pull up outside Masthouse Terrace Pier and take their pick from several ferries, taking you around London.

Another factor that makes the Isle of Dogs a nice place to live for families is the excellent schooling on offer here. The E14 district is regarded as one of London’s best locations for schools, and the Isle of Dogs continues the trend.

All primary schools in the area have received at least a ‘good’ rating by Ofsted, meaning parents have plenty of choices. The area is also home to Canary Wharf College, which has received an ‘outstanding’ commendation and has two sites at primary level throughout the Isle of Dogs.

At the secondary level, the area is served by George Green School and Canary Wharf College (Crossharbour), both of which have been rated as ‘good’ by Ofsted. What makes the area even more attractive in terms of educational provision compared to other parts of London is the fact that there isn’t a premium attached to properties within catchment areas for good schools. This means you can secure your child’s great schooling without additional cost.

You couldn’t write an area guide for the Isle of Dogs without mentioning the great employment opportunities on offer in the area. The Isle of Dogs is home to Canary Wharf – one of London’s chief financial districts. This means there are numerous employers in the area including many household names like Barclays PLC, HSBC and JP Morgan. However, while the area has a reputation for finance, other industries are starting to make inroads into the area, including many tech startups. Office blocks continue to spring up meaning that new employers continue to appear and make the area their own.

As the Isle of Dogs is served by a good transport network, the neighbourhood is within easy reach of many other major employment zones in London, including the city. From Canary Wharf station, Liverpool Street can be reached in just 30 minutes. However, once Crossrail services are introduced, those travelling from the area will be able to reach the city of London is just six minutes, meaning the opportunities are endless.

Though the Isle of Dogs isn’t a major tourist destination, the area is home to some great attractions. One of the best known attractions in the area is the Museum of London Docklands which explores the history of the docklands, including its links to slavery.  For something a bit more lighthearted, the local Everyman Cinema is a popular spot for evening entertainment. Outdoors types and nature lovers are also well catered for here as the Isle of Dogs is home to numerous parks and green spaces.
The most loved nature site is Mudchute Park and Farm, which has over 32 acres of countryside for locals to explore. There are also many garden squares and local parks too.

For shopping, the Isle of Dogs has a great selection of retailers, including major brands and independent shops. The best area for a bit of shopping action is the Canary Wharf shopping centre and Canada Place, while many neighbourhoods boast their own local shops. There are also many restaurants and bars dotted around the area. Canary Wharf in particular has some top establishments, with big names such as Roka and The Ivy. What’s more, many of these restaurants are located within glass towers, offering beautiful views towards the Thames.

Living in the Isle of Dogs

In conclusion, the Isle of Dogs is a fantastic place to live with great access to schools, jobs, transport, and leisure facilities. It’s therefore unsurprising that the area was voted the ‘best place to live in London’ by the Sunday Times in 2019.

Proper Local is a local estate agent in the Isle of Dogs. We specialise in properties within the E14 district – areas including the Isle of Dogs, Limehouse and Blackwall. If you are interested in buying or renting in the Isle of Dogs, or you have a property in the area to sell or let, get in touch. We are one of the highest rated letting agents in E14, with a diverse property portfolio for both renters and buyers. Contact us to discuss your requirements, or browse our popular pages below: